Living in Haiti is a bit of a fishbowl. Everyone knows everyone else’s business, struggles, or at least the rumors of what those things are. The expat community itself does enough damage to each other, but it doesn’t take much for the local population to figure out that they can play us against each other as well. There is nothing like the ego it can give you when a local comes to you and tells you how much better you are doing than the other “missionary” down the street. I have to put my foot down and squash that pride and arrogance that wants to rise up in me in those moments. There is so much that sets us up against each other without even trying. For me my own mistakes didn’t help me at all as I kind of dug my own grave.

Having gone through having an affair and a divorce in Haiti brought all kinds of shame, rumors and unbelieveable marginalization for myself personally. I spent about 4 years as a recluse in my neighborhood. Most of the missions in my neighborhood wouldn’t allow their short term teams to even visit us, let alone buy our products or give us cereal boxes. (Not sure how that was supposed to help or teach me a lesson?) It wasn’t until my divorce was finalized that I finally felt like I could strip off the shame and stand up and just say, “this is who I am.. flaws and all”. It is incredibly freeing to just be able to be who you are. It is a great feeling to fall off a pedestal. Or at least to not be on one anymore.

How I was accepted back into my larger expat community and my road to recovery emotionally is largely due to one person, who I believe needs mention in the story of my journey in Haiti.

In 2013 , I was working pretty much by myself everyday, very isolated but had need for a graphic designer and put it out on the expat websites here in Haiti that I needed some help.

The next week I had an interview scheduled with Callie Himsl, a young and energetic artist who had just been fired from her current organization because she was dating a Haitian man. (They will be getting married this year!).

Callie Himsl came into my life as grace in disguise. She never questioned me. She never judged me. She was never bothered by rumors she heard about me. 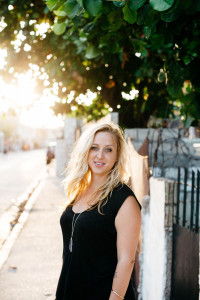 Little by little, my guard came down with her and I was able to have someone to share my story with. My hurt from what I had seen in Haiti, the mistakes I had made, the fears I had, how lonely I felt finally found an ear that would listen. And Callie became a bridge.

She started inviting people over to see what we were doing. She showed the expat community, one by one, the things that we were doing in the neighborhood- the things that had nothing to do with me and my failings. She showed people the hope we were providing through job creation and she painted me in a new light amongst our peers in Haiti. I felt like she was my advocate. She is my hero. She teaches me how to love people. She teaches me that even if I have heard things about people, that I am still supposed to love people. This past year, on my 40th birthday and the day that I found out about my cancer diagnosis, I was able to have a beautiful birthday celebration with over 12 women from my neighborhood, who were now my friends- largely because of Callie. Redemption feels good.

Not one judgmental person could have helped me come out of my shell in Haiti. But one person who overlooked my junk and just accepted me made all the difference for me personally. Her friendship set me back on a road to personal restoration.

The secrets I have learned in Haiti through people like Callie are the following:

My challenge is this. Who in your sphere of influence do you marginalize? Who do you keep at arms length? Who don’t you trust because of what you have heard about them? Who do you disagree with their lifestyle? Think of one person who fits this description, and decide to love them. Just love them. And see what happens to them. And to you.