I walked by Madame Cleriye’s house today. She was rebuilding a new tin roof to go over the cement slab that joins onto her house and covers the little restaurant where people can buy her “fritay” (fried foods). After the earthquake, Apparent Project facilitated the building of almost 60 houses in our area- most all of them wooden 14 by 14 foot one room homes with metal roofs and particle board walls. Six years later and you can still see them all over the neighborhood, brightly painted little beacons, serving their purpose, and outlasting their projected lifespans by years already. 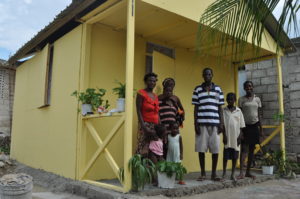 Cleriye is the area “chief”- the man in charge of the “Zone”  and of course he managed to get his hands on one of those wooden homes that were being built for free for those in need. They built it right in the driveway slab of a three story house that had collapsed in the earthquake. I remember distinctly that the house had collapsed onto the car and the car was standing on end for months before they came and removed it. It is in this exact spot that Cleriye build his little wooden house.  You can still stand there behind the house on the edge of the slab and look down and see the ruins. Perfectly tiled floors, the plumbing for the toilet in the bathroom, everything still there.

Cleriye was my go-to guy for all things in the neighborhood. He was the one I went to when we needed to rent a house, had trouble with someone in the neighborhood, or needed a specific job done. He was tall and handsome and had a deep voice and a presence to him that demanded respect. He would find whoever we needed and he appreciated the fact that so many people in our neighborhood were working because of what we were doing, including his oldest daughter. He built a little bar off to the side of his house and his wife, Madame Cleriye, would make fried foods and they would blast the soccer matches and kompa music every night that power was on. Most of our artisans eat there everyday and it is just one of the many small businesses that has sprouted up around what we are doing at our artisan center.

Cleriye was know as a bit of a ladies man. He was in his late 50s and his oldest daughter’s mother-who was his first wife, lived just around the corner.  She was bitter for being left, but still he managed to get us to build a house for her after the earthquake and it was in that house that she died of a stroke a few years back. Marie Michelle, Cleriye’s daughter, has since gone on to have a baby girl- Cleriye’s first grandchild- and she is a great mom who works in our pottery section helping prepare the clay every day. Cleriye found a young thing to replace his old wife not too long ago and they were soon expecting. Apparently there were a lot of young things that contributed to his first wife’s bitterness.

Once his new young “wife” was pregnant, it solidified her new title as the “new” Madame Cleriye, the fried foods girl. Today she has a precocious three year old that waves and yells my name every time I walk by. When she was about two years old, she used to yell “blanc” every time she would see me. “Blanc” means “white”, and it is what every Haitian child yells out when they see us. It is mildly annoying after eight years, so I had a sit down with this two year old and told her that my name was Shelley and to stop calling me Blanc. Now she just calls every white person she sees, “Shelley” instead. She is totally adorable.

Cleriye had another son from another relationship. He is a bit of a lost boy, 12 or so years old, roaming the streets and not paying much attention to the fact that he has a family. I’m not really sure who is even looking after him.

Two years ago, Cleriye started losing weight. Losing weight in Haiti is never a good thing. It means you are sick and possibly dying. To be robust and curvy is to be healthy and have what you need. Skinny is never sought after here. It means something is wrong. Cleriye’s tall frame started to look frail and I told him he needed to let me know if he wanted some help. It’s an odd day when a Haitian person in my neighborhood doesn’t take me up on an offer for help, but he declined and continued to deteriorate. He must have known that what he had couldn’t be cured. People started whispering. They said it was voudou and brought the priest over. Then they called out to God with loud prayer vigils. Night after night, the prayers and petitions and fervent songs went up. All along, he wouldn’t go to the doctor and wouldn’t say what he had. I suspect it might have been AIDS or Cancer- both of which have stigmas that he wouldn’t have cared to deal with. He still got slammed with shame. He was dying and all I heard about him were ugly rumors. It made me sick. I went and saw him when he was just a skeleton. I asked if there was anything I could do for him. He shook his head no and talked about God’s will. Always God’s will in Haiti.

He died soon after. They had a wake for him and a huge voudou ceremony for the funeral. And then a Christian ceremony right after. As they do. I would see his son roaming the streets and playing with sticks and rocks and wondered who was caring for this young man. I need to follow up with him. I feel neglectful that I didn’t do more, I feel neglectful for his son, and then I remember that I am only one person, doing the best I can in this neighborhood with only a certain number of hours in a day and my own four kids to look after.

He left his wife and baby girl behind. I still hope it wasn’t AIDS and I watch his wife and daughter carefully for signs. Maybe I should offer to get them tested. But the stigma around that knowledge could crush them. So I wave to his baby girl as I pass by. The little one still knows to call me Shelley- along with every other white person who wanders by. I buy my fried foods every now and again from his wife, Madame Cleriye, who is round and healthy for now and I watch their new little roof go up. I watch our artisans eat at her little fried food stand and am amazed by the tiny signs of  blessing because of the industry in the area. I am reminded that we aren’t just making paper bead bracelets and mugs. We are giving a little three year old who calls white people “Shelley” a chance to grow up going to school, and to not be hungry, and to stay healthy. God willing. 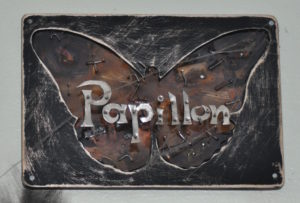