Hillary and the “Woman Card”

Today something magical happened. The most watched woman in the world right now, Hillary Clinton, was on the news after winning several states in her nomination campaign…. (pause)….. and she was wearing on of OUR necklaces.

There it was, like a pile of diamonds around her neck to me. Our Neutral Signature necklace. What a moment! 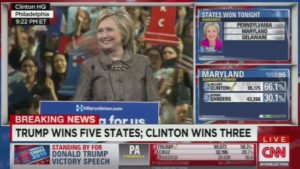 Hillary was talking about, or defending the fact that she was a woman- one or the other. (I think I was too bedazzled by her necklace to hear what she was saying), but it made me think about that “woman card.” What does it mean for her to be a woman?  What does it mean for women in general, and what does it mean in poor communities to be a woman? I could write a book or two about the difference between being a woman in America and being a woman in Haiti. Although we have our challenges, trust me when I say it is nothing in comparison to the struggle it is for woman in the developing world to have near the opportunity that are available to men. The statistics on domestic abuse, servitude, education, and work opportunity are staggering. And they aren’t pretty.

One thing I find encouraging about the Clinton Foundation is that they have been committed to the predicament of women and girls all over the world  through their No Ceilings campaign. Chelsea came and visited us last year as part of this conversation.

The Clinton Foundation  has been consistently committed to giving women and girls around the world opportunity that they may not have had otherwise. And they have been committed to Papillon Enterprise in helping us have “no ceilings” on our growth and development as our artisans get better and can produce more. Because of the Clinton Foundation and their generous donation to buy more kilns and help in capacity building for our artisans, we are now accepting purchase orders for 2000 plus mugs per month. Last year at this time, I think we were making maybe 100 per month.

Our team of potters are all young women and mothers. To me, this is what playing the “woman card” is all about.  The woman card is not about hating on men, or being better than men, or being petty and giving attention to how life is unfair because of your gender. It is about embracing the unique challenges that being a woman presents: things like child bearing, breastfeeding, less obvious opportunity, attaining respect, being physically weaker (which is a big deal in the developing world). It is about taking these challenges and turning them into assets. Because of what women face in life, they can be more resilient, they are hard working (have you seen a Haitian woman work to make dinner or wash clothes?), they are good at multi-tasking, they are compassionate and empathetic, they know how to lead with tenderness, they keep priorities straight, take care of the children before they take care of themselves. In short, women are amazing. There is a Haitian proverb that says “Fanm se potomitan”- “Women are the Central Pillar”.

Men are amazing too. There is nothing quite as endearing as a good father. At Papillon Enterprise, we are not a woman-only artisan group. Roughly 1/3 of our artisans are male. I realized pretty quickly that if we were going to fight against the rampant orphan crisis caused by poverty in Haiti, that we couldn’t only hire mothers. Fathers want and NEED to be able to take care of their families as well. We hire parents. But we love to see women who can’t read or write because they never were able to go to school learn to throw beautiful clay vessels and have their names framed in the workshop with the title “Master Potter.”

That is why I thank Hillary Clinton (and Bill and Chelsea) and her foundation. Not just for wearing our necklace, but for giving our mothers and fathers a chance to take care of their children through sustainable employment. For me this isn’t about politics. I don’t really want to know who your are voting for or what you think about policies and agendas. This is about our artisans being able to experience the joy and pride in having something that they made by hand on a woman who spent eight years in the White House as First Lady, years in the senate, served as Secretary of State, and now running as a presidential hopeful. This is a woman who is seen daily on the news and was thoughtful enough to put on a necklace today that represents mothers who are struggling just to feed their babies in Haiti. For her, today, I am so grateful.

The necklace in the neutral color-way is available now at: PAPILLON-ENTERPRISE.COM

Thank you for helping families in Haiti through your purchases.