If at first you don’t succeed…..

We were working as house parents in an orphanage in the Delmas 75 area and were at home with 24 boys when there was a knock at the gate. A lady was standing outside with her baby boy and was asking for help. She knew it was an orphanage, but she was not asking to leave her baby. She just needed the means to be able to take care of him.

It was my moment. It was the reason I knew I was here.

I asked around with some of the Haitian staff about what I could do. We already knew that we wanted to empower parents to be able to support their kids and not be forced to give them up, but we didn’t know how we would accomplish this. I asked the locals that I knew if they could think of any way for this woman to be able to make money- to have a job.  It was then that I was introduced to the term “machant”.

Most women in Haiti work as “machants”. They buy their household supplies or groceries cheap downtown and then carry them in baskets on their heads into the outlying areas and the country sides (known as the “province”) and resell their goods at a higher price. A classic wholesale to retail model, but with margins so slim a person can barely live off of the profits. These women will often walk around yelling out live announcements of what they have to sell, or they might find a spot at the side of the road and sit all day in groups of other machants competing to sell their goods. You see it everywhere on every corner in Haiti. It is the way of doing business for the poor. The machant, the back bone of Haitian society.

This woman at the gate, could have an opportunity to be a machant I thought. I asked around to try to figure out how much it might cost to get a little business like this started. Several hundred dollars would do the trick, I was told. So I invested $200 of personal money into startup costs for cleaning supplies- household detergent, bleach and soap, for this lady to resell and start taking care of her baby. I drove her downtown, we bought the supplies and I even dropped her off at a spot near her house where she could start selling.

I was pleased with myself. I felt like a hero. Pat on the back, Shelley. You did the good deed.

The next week, I went to check on her and came to find out that she was locking her infant son in her house in the dark all day by himself while she went to sell. The following week she was out of money and out of supplies.

This woman did not have the life skills or the stability that was required to be a successful machant. She either didn’t have the education to calculate the costs out or she felt like as long as this “blan” (me- the white girl) was helping her, that she would continue to get free stuff and didn’t need to manage the buying and selling. Handouts have crippled the mindset of the poor in Haiti and I have learned the hard way that often times, when there is a “blan” involved, there isn’t a sense of it being anything but a freebie and they know in all seriousness that they will probably just get another handout if things go awry. Responsibility for what one has been given goes out the window.

Another thing that I have found that kills the sense of responsibility is theft. If no matter how hard you try to get ahead, what you have earned gets stolen, then you develop a very short term mentality about your assets. Perhaps, if she thought her next door neighbors would come into her house and steal all of her soap, she would not have incentive to sell at a profit. Instead, she would sell for a cheap and quick sale and pocket the money so that she didn’t lose everything. She might then quickly go use that cash for much needed food or living supplies, such as charcoal for cooking. Then she could show up at my door with a sad face and perhaps get what she needed again. It might be worth the risk of losing her business if she was faced with the insecurity of theft.

Taking care of today instead of thinking about tomorrow is epidemic in poor societies. I have seen people work so hard for the future only to have everything stolen. There is a reason why people do what they do and how they do it. I have found that it is better to observe closely and reserve judgement for as long as possible. More often than not a logical explanation for what may first appear to be ignorance or thoughtlessness will emerge.

I don’t know, and I certainly didn’t know, at the beginning, how to do the micro grant/micro-loan idea well. There are so many factors as to how it could become successful in Haiti, and I was still a newbie and had no idea what I was doing. Three times I tried to help women start these kinds of small businesses and three times I failed.

I started to realize that I needed to give them jobs that I could guarantee and not just their own little businesses that seemed to be doomed to failure for my lack of understanding. It was at this point that I started sewing prototype little dresses for an idea I had.

Apparent Project (www.apparentproject.org) had already been set up as a legal non-profit with the goal of teaching skills and creating jobs for parents for the purpose of orphan prevention. I just wasn’t sure how I was going to go about it. I grew up sewing and my first “job” when I was seventeen years old was a business I started making Fimo bead jewelry and sewing bags and hats. I had learned to sew when I was nine years old and all through high school, I sewed and altered my own clothes into funky designs and upon graduation, I sold at craft fairs and kiosks through my little business startup. It was an unsuccessful little business, but it gave me experience that I had no idea would come into play so many years later to help poor mothers in Haiti.

I knew how to sew and so I thought this was how I would start helping women with jobs. I had this idea of having a whole line of baby clothes and accessories.  Women in the states would jump on board as sales reps and have “home parties” to sell the baby goods made by Haitian moms in order to help them keep their children. A kind of “baby shower” for a poor Haitian mom. I felt like the idea was brilliant and the marketing would make it successful.

Problem is there is no fabric in Haiti.

And it takes years to train a woman to be a successful seamstress. Trust me I know this now.

It is the hardest thing that I have ever tried to do in Haiti to create jobs.

It is every foreigner’s go-to plan when they land in country and want to help women.

“Teach them to sew”.

And it is miserably difficult.

And believe me when I say that it was not the first time or second, third, or fourth time that I would go on to fail at something I tried to do. Failure was a part of the process. And not giving up became the keys to the eventual success that we would have at job creation in Haiti. The best was yet to come. But at the time I didn’t know it. At the time I just felt like I was swimming upstream while women were suffering. The hope of eventually helping at least one mom in my lifetime was what kept me motivated. I certainly wasn’t dreaming big at the time. But for some reason I stuck with it. Looking back on it all, I am so glad I didn’t give up. 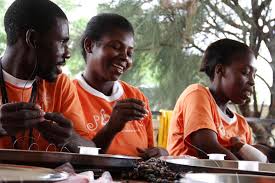