It was August 2008, just a month after arriving in Haiti. I was so new and unaware of so many things. Sometimes it’s that naivety that allows for the opportunity to do something that if you had known better, or been wiser, that you might never do. In most cases, making decisions out of naivety or lack of understanding does not end well, but in this case, it ended extraordinarily.

I was on my way over to the main baby/toddler house of the mega orphanage that we were houseparents for. We spent all of our time in an auxillary house with the boys ages-5-18. There were 24 boys in the house. Many people would call them orphans- although it was in that year that I truly realized how mislabeled they were. So I walked in to the baby house and the security guard, a deported American with a deep baritone voice jokingly asked me, “Do you want a baby boy?” I quizzically looked at him and he motioned over to a mom standing in the garage overhang with a little bundle of a 2 month old baby boy in her arms. The orphanage director was unavailable at the time and it gave me a moment to curiously see what was going on. With the help of the security guard for translating, I was able to ask this mother some questions.

What is the baby’s name? Jackson

How old is he? Two months old.

What is going on with you and this baby? I want to leave him here. I am homeless. The father has left me and I am sleeping in abandoned homes every night with the baby. It is August and hot and I can’t even take care of myself, let alone this baby.

The baby started to cry. I motioned to her chest. She began to breastfeed him. He calmed down and relaxed in his mother’s embrace. I was also a nursing mom at the time. I knew all about infant bonding and the comfort of nursing. This was good. It was a moment the baby needed. To know his mom was there. IT would be all too short lived as that was to be the last time his mother every nursed or even held him.

I asked her if she had other children. She did. She had a few more out in the country side.

At about this time, the orphanage director showed up and asked Altagrace what she needed.

The nursing mother inside of me was screaming.

I knew what this would mean for this baby.The heartbreak was about to go down. But I couldn’t say anything or do anything. This was a weekly if not a daily occurrence. This was what the church in America was throwing dollars at in their attempt to “care for orphans in their distress.”. The orphanage director said she could not take the baby without paper work. She needed identification and a birth certificate in order for the baby to be eligible for adoption. The mother agreed that she could go get the paperwork, but reminded us all that it was in the country side with her children. She asked if she could leave the baby while she went to retrieve it. The orphanage director agreed to let her go alone. She handed over the baby to me and began to walk away.

Oh shit. I thought. This baby is losing his mother. Right now. This is happening.

She didn’t look back. Her head was down, tears were in her eyes and she walked out the gate and never came back. Ever.

She walked out the door and I was holding him. My Jackson. He started to cry. I did what every mother in my situation would. I nursed him. I did that. I had milk and I nursed him. I was not free to make a decision to adopt him in that moment and felt like it would be too hasty of a reaction anyways, so off he went to the baby room of the nursery. the baby room was a  room full of cribs with about 30 babies and no more than 2 nannies working at a time. It was everything the nannies could do just to keep the kids clean and fed. The babies spent the majority of the days lying in their cribs with bottles propped in their mouths. Some of the cuter babies were held more by the older girls in the orphanage who would come down and play with the babies. Jackson was not one of them. He laid there for six weeks. I came over every day: for the first few days and continued to nurse him. After about 4 days, he had become accustomed to a bottle and didn’t want to nurse anymore. I still would visit frequently.

After about three weeks he was hospitalized. He was losing weight and was not thriving.

At six weeks he was in the pediatric intensive care ward with IV’s strapped to him. He was starving to death.

I walked in to the room where he was and couldn’t pick him up because of all of the equipment around him. I just held on to his tiny feet and kissed his feet and his toes. Now at 7 years old, his feet are so big that we can share shoes. I tell him it was because those kisses were magic and gave him his huge feet. He believes it for now and it is a great story he loves to hear.

I really could’t wrap my brain around what I was seeing happen to this baby. Several other babies in the few months I had been working in the orphanage had already died. There was a little baby girl who’s mother had come to the orphanage to give birth to her and had left shortly thereafter. I had asked if I could take her. I wasn’t allowed to.  That baby girl died in a few short months.

I felt responsible for this one. His mother had left him in my arms, hoping for a better future than what she could offer him. She didn’t abandon him to die of starvation. she trusted us. She had trusted ME.

I decided to see what I could do to intervene and asked the orphanage director if I could take him to the auxillary orphanage with me where the boys lived and see if I could figure out what was going on with him. She agreed. On Sept 23, 2009 I took Jackson into my care and the next day took him to the best pediatrician I could find in Haiti: Dr. Sophia Nazon. She examined him and declared him to be lactose intolerant. He had a bunch of other side effects of the malnutrition that had crept up: respiratory issues, allergies, malnutrition. She prescribed me a few things for these other issues and instructed me to switch to lactose free baby formula. I did.

And Jackson got better. He started to thrive. And I never took him back to the baby house.

We started the aoption process or Jackson in 2009 and it was interrupted by the earthquake of 2010. Jackon’s adoption was finalized in 2013 when Jackson was almost  four years old. He is my son and always will be.

Today Jackon is 7 years old, wears a size 5 men’s shoe, is  funny, athletic, bonded, witty, and  cuddly teddy bear,  H does suffer from an eating disorder as a result of his time in the orphanage.

I am looking for a specialist to help me with this one residual issue from his traumatic infancy. 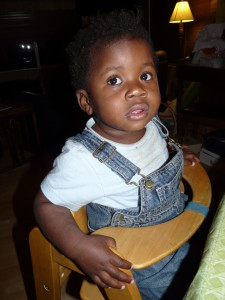 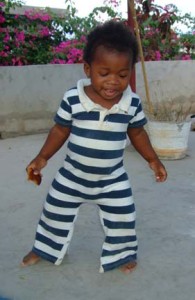 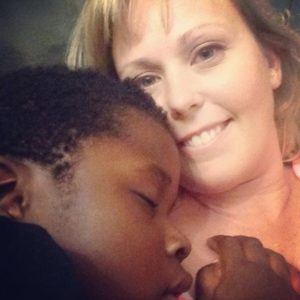 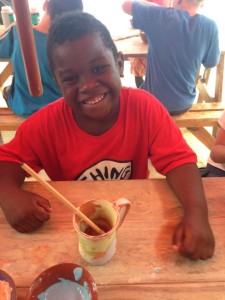