Grace texted me that they had arrived. I dropped everything in my office and texted back that I was on my way to meet them across the street at the café. Today is an important day. It is a day that will probably go down in our company’s history, I thought.
For months we have been in talks with Dr. Vince and Grace Tillyard about the women that they are working with over at Bernard Mevs Hospital in their chemotherapy program. Many of the women come in already at stage four cancer with little hope other than the treatment that they are receiving that might give them a few more months or years if they are lucky. Grace had met with me about a month ago to tell me about the women in the program who had been abandoned by their spouses and left alone, sick, and as single mothers worrying about what was going to become of their children. 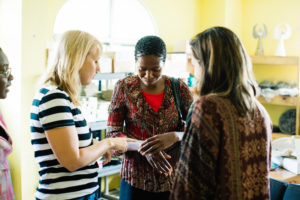 We have been collaborating on how to give these women a little bit of income and some piece of mind for the children that they will be leaving as their legacy.
They had arrived. Grace had brought Melissa along with her cancer outreach coordinator, Mia Alcindort.
Melissa has already had one breast removed and the cancer has spread to her bones. She has a five year old little boy that she is worried about. She is full of life. I would never know she was sick. Grace wanted Melissa to see our operation and get an idea of how these women- some of whom are too sick to travel, could do a little bit of work to be able to provide for their families. We want to create a line of jewelry that would create enough of a profit that could go into a trust fund for their children.
We sat down and spoke with Melissa about her journey: How she had been abandoned and how she had faith that she could still be healed. That only God really knows. She wants to start working right away. She is determined. Even with very little hope that she will be able to do it for long.

I told her that I also had been through cancer. Not the same way, but enough to have some kind of idea. Her eyes locked on mine with a small glimmer of recognition and understanding.
We at Papillon are in the business of orphan prevention. We don’t want Melissa’s son to end up in an orphanage or as a child servant. We want to give her the peace of mind that when and if God takes her home, that He is also taking care of her son. We want to be a part of that story. 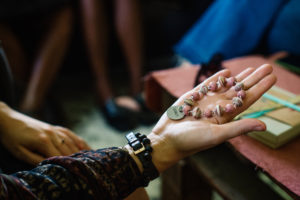 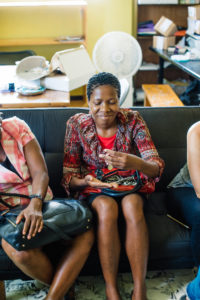 We will be calling our jewelry line made by cancer patients like Melissa the “Legacy” line. We are currently looking for big partners (and little ones too) to help us sell. We want the whole cancer ward to be teaming with hope and prosperity. A lump in my throat and a butterfly in my stomach remind me of the sadness and joy that is in store for us in this collaboration. We are so honored to be able to participate in the hope that these jobs can give women like Melissa. We are humbled and so thankful to be able to partner with her. Much is yet to come. 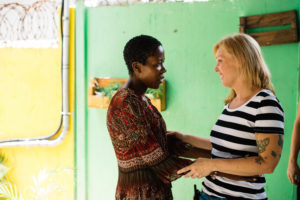