Mario and the journey ahead

Last Wednesday evening I was laying on my bed  after work in front of my wind machine fan, cooling off. The weather is getting hotter and more humid by the day as the hottest part of our endless summer approaches. The kids had just been picked up from school and were already starting to fight about what channel they were watching on TV and then the text came in.

What? I thought? What did that mean? Was he dead? Where was he? What happened?

This past few weeks have been a whirlwind. Mario (Jean David) Castin, one of my employees had been shot in the face with two bullets being lodged in his jaw in an attempted robbery as he was picking his father up from the airport that day.

I first met Mario when he came to me for an interview several years ago. He was nervous and quiet as he told his story about how he got to America by boat with his father seeking political asylum after the Duvalier era fell and Aristede came to power. His father was on the wrong side politically after the governmental upheaval and they knew they had to flee to avoid being assassinated by the new regime. He and his dad were picked up and detained in Guantanamo Bay and his memories of that time itself could fill a book, let alone the initial escape by boat and the eventual immigration to America. His family worked hard in their new country in order to provide a new life for him and for his sisters. Mario ended up falling in with the wrong crowd as a young man which eventually led to him spending ten long years in prison in the United States. After doing his time, he was escorted- with a one way ticket back to a country that he barely knew and certainly had no idea how to be successful in given his long time in prison, lack of proficient Creole, and lack of knowledge about life in Haiti: a country he had left as a young boy.

Deportees are a marginalized people group in Haiti. Indigenous Haitians tend to be afraid of them and very often won’t hire them, they don’t usually speak French, often times don’t speak Creole well, find Haiti to be a “foreign” country and often have very few connections for survival and networking. As young people who went to highschool, ate McDonald’s and watched movies in theatres for fun on the weekends, the adjustment to now being in Haiti with little applicable skills, no job opportunities, often times no homes, food, or medical care and no opportunity because of their status as deportees can be suffocating.

And they can’t leave.

They can’t ever go home. Most of them are permanently separated from their families, their children, their mothers. They made mistakes for sure, but it is a steep price to pay. And one that has no end in site.

Mario sat across from me timidly and told me his story. I didn’t know that the day before he had cut off his dreadlocks with hopes of getting the job he was interviewing for with me. He cut them off because he wanted to appear respectable. He didn’t think we would accept him as he “was”. But we do and we did.

And within a year, Mario became known in our area for making the best smoothies at the Clay Café: our on site oasis of burgers, pizza and healthy refreshing smoothies. The self proclaimed “Smoothie King” ended up helping start the new restaurant across the street when we opened last year and now has about 7 employees under him that he has trained to help run the Clay Café. Everyone in the neighborhood knows and loves Mario. His smile brightens the world. He always greets and remembers our visitors who sometimes come only once a year. He has had the priviledge of making smoothies for NFL players, Donna Karan, and even President Clinton. His journey and determination have brought him to places that perhaps 6 years ago, he would never have imagined.

When I got the text, my heart fainted. Not knowing for several hours whether he was going to make it, spending the evening trying to coordinate with willing donors all over the city because the blood bank was out of blood for him, seeing him survive the night and have two bullets and his left jaw removed, watching him breathe through a trach tube, and then watching the outpouring of the community of love and support has been the craziest and most touching week that I can remember in a long time. 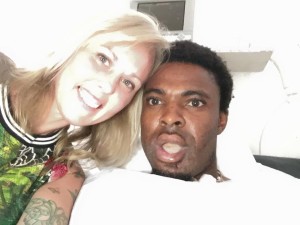 This weekend, we will be having a two day blood drive at the Clay Café, so that we can stock the Red Cross with much needed blood. We will also be having Mario come to see all of his fans and supporters on Saturday afternoon as he was just discharged from the hospital today. We have made special “Mario” bracelets that will be for sale and all of the food purchased will help to offset the cost of his medical bills as well. He will need to have reconstructive surgery done in the next few months as well as dental implants for all of his bottom teeth. He has a long road to recover what was taken from him last week, but knowing who Mario is and what he has already overcome in his life, we are confident that he will make the absolute best of his situation.

In his own words “BLESS!!!! LOVE!!!! FORTUNATE!!!!! GREATFUL!!!!! Are some of the way I’m feeling right now. I feel like there is so much more to say but I just can’t find the words that best describes what I want to say just. Well I guess I will just continue to give thanks to GOD!!!! For I know how far in the hole I was 8 days ago.”

If you would like to donate to help Mario with his medical needs, you can do so here:

Much love and support to our dear friend, Mario. 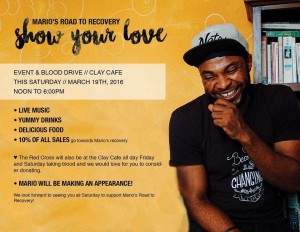