My story: an excerpt.

Below is an excerpt of my story. This summer, I will be taking a sabbatical in order to carve out the time to write down the things I have learned and seen over the past eight years in Haiti. I want to be able to tell the story of the mistakes I have made and the challenges I have faced in order to save others from having to repeat them. It is my hope that we can all learn how to do orphan care better for the sake of broken hearted mothers and broken hearted children in orphanages everywhere. 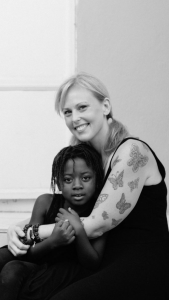 I am like any other woman out there. I cry at hallmark cards and sad movies where pets die.

I care deeply about suffering in the world and I want to see kids taken care of.

My heart for adoption was awakened by my own fertility issues. It took time to conceive my first and even more time coupled with fertility drugs to conceive my second. I had always wanted to have a big family, and as I realized it was not going to happen in the traditional method, I started looking into adoption.

I remember pouring over the pictures of “waiting” children on the adoption websites. I felt like love would be enough for any of those kids. That they all belonged with me. I remember a little three year old albino boy from China who caught my attention. His special needs drew me to him even more. I have always had a tender spot for marginalized people and as I looked at waiting kids on the adoption sites, my heart was awakened.  I spent so much time looking at the adoption websites. I reserve my own judgment of these particular kinds of websites where children are listed the same way as cars are on Ebay, and I will reserve judgment of myself and other families who were drawn to and formed bonds with children through these pictures. I am only describing the process that I went through and where I ended up after eight years.

Scrolling through those pictures of children is when it happened for me. I saw a small face, with a flirty smile and big brown eyes. A little boy from Haiti.

Where is Haiti I thought? Isn’t it somewhere in Africa?

A few searches later and I found the spot on the map that would someday become my home and my mission.

Haiti is the poorest country in the Western Hemisphere. 500,000 children are said to have been abandoned by their biological parents. Many end up as street kids, many are given to wealthier families as domestic servants (restaveks), and many more end up in orphanages.

To say the word “orphanage” or “orphan” and have one definition for that word would be to be completely unaware of the situation in Haiti. There are brick and mortar buildings called “orphanages” where children are starving, being abused, being trafficked, and worse. Many of these institutions are capitalizing on children for the financial benefit they can gain through using the kids, donations, fundraising or all of the above. On the other hand, a great orphanage may raise kids in family style pods with good education, a possibility for adoption, nutrition meals and stable care givers. When someone says “orphanage” to me- I have no idea what that means anymore. And if I have no idea what that means after eight years here, how is a well-meaning poor Haitian parent who can’t afford to feed their children going to know where to leave their kids and how to vet out a good orphanage?

When I say KNOW where to leave their kids. I mean just that. OVER 90% of “orphans” worldwide are poverty orphans: children whose moms and dad simply did not have the means or the ability to properly care for them and instead chose to leave them at a place where they assumed they would get better care. Most of these parents do not have the intention of abandoning their children. Many are often just looking for a “free” boarding house for their kids.

So this is where the North American church has been known to come in with such a tragic solution for the poverty orphan.

We westerners have gotten so unaccustomed to poverty that we think that being poor is worse than not having a mother. We are far more willing to build an orphanage in order to give children an ability to not be AS poor in exchange for them losing the primary loving relationship in their lives. And we do this blindly and we call this “holy”. We call this “caring for orphans in their distress”. We visit poor countries and act like it would be a blessing to these poor children if we could only just “take them home” with us. As if the woman sitting off to the side, with sweat on her brow washing clothes for her children has no value or rights as a mother in our eyes. She is poor after all. Very poor.

After eight years of seeing this first hand, I find this nothing short of tragic.

The amount of money that it requires to keep a child in a decently run orphanage for one year could give job skills training to parents and enable them to support the rest of their children for their lives, or send three kids to school (usually enough of a reason for a child to not have to go to the orphanage in the first place). But it’s not as catchy maybe. Orphanages are far more appealing for donors than schools. It tugs at my heart strings to see abandoned children. I want to give. Marketing an orphan is a gold mine. And orphanages  are much easier to film and photograph than watching poor middle-aged adults learn how to do something mundane, like sew, or how to do accounting. Try to advertise an accounting school. It would put anyone to sleep.

These are the things that I saw and have seen and that motivate me to do what I do. I want to create economies for poor parents to be able to support themselves and their children at a scale that can turn the tide for their families and lift them out of poverty. My life’s goal is to become a clog in the wheel of orphan creation and begin to create a new path for parents to have and keep what was supposed to be theirs from the beginning: their children.