Sitting around a table and talking with old friends about old times can allow you the space to reminisce about so many of the good things, the funny memories, the strange happenings that you have been through together as friends. So many people have been following the journey of Apparent Project and the formation of the business arm- Papillon Enterprise and have been a sounding board for me when I am discouraged, when good things happen.. when I just need someone to hear my story.

Today I was reminiscing about some of those fun moments and wanted to highlight them….

I remember when Hurricane Sandy hit the NYC area. We heard about the people who were in need and the artisans decided to work a day without pay and have their earnings go to a family in need of a roof in New Jersey. Our artisans voluntarily and collectively earned over $600 in one day ( no chump change in Haiti) and mailed a check to a needy family in the USA.

I remember after the earthquake when the artisans were working in the yard of my house because everyone was too afraid to be inside and we had no room for the number of artisans working anymore anyways. I remember finally moving into the artisan center- a huge 8 bedroom, three story house with the artisans all working in one room. Everytime a truck would go by, everyone would jump up and run out of the house, bumping into each other like pinballs, and then falling on the ground laughing at themselves again because every little noise made them think there was another earthquake.

I remember the artisans decided to have Saturday prayer meetings on their own to pray for the business when we were experiencing threats in the neighborhood. When they would come to pray, they would spend the morning singing and because I live on site, I would get to wake up to the sound of their beautiful hyms asking God for blessing and protection.

I remember the day that Genia was roaming the street outside my house, and the moment I saw Makilene sitting on the ground slumped against the perimeter wall, and so many other similar moments with countless mothers waiting at the gate in the sun with their scrawny babies in their arms and they finally got jobs. I get to see Genia’s little girl every day thrive as she is in the daycare and becoming a precocious little young lady.

I remember when Vesline went into labor as a seventeen year old girl living in a tent exactly one year after the earthquake. I remember examining her to see how far along in labor she was before transporting her in the middle of the night over collapsed rooftops to the hospital. She lived with her baby boy in the artisan center for three months and her mother died of cholera during the outbreak in 2011 leaving her a new teenage mom and a complete and total orphan. Today Vesline works in the childcare center and her sweet son, Pierreliens, who is now 5 years old comes to the artisan house to find mom after school every day.

I remember the black eyes of so many of our artisans who then decided to leave their abusive boyfriends because they didn’t have to endure it anymore because they were able to support themselves.

I remember the day that three of our artisans got visas to go to a trade show with me in NYC. They kept talking about all the things that they would do in the snow once they finally saw it. Reality played out a little differently as they cautiously approached it, picked it up for a moment, realized how much it hurts to have your fingers freeze, put it down and then wanted nothing to do with it. It was on that trip that they were arguing about how they would eat chicken in NYC because Shirley wasn’t any good at cleaning chickens. I clued them in to the fact that chickens come ready to eat in America.

I remember the moment that Makilene had finally earned enough money to buy her own house after living in a tent for several years with five kids.

And I just recently remember over 20 artisans deciding to give blood at the Red Cross to save Mario and contribute to the blood bank for their fellow countrymen. 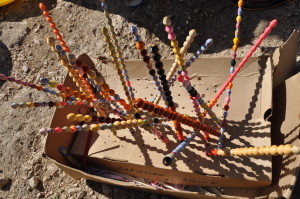 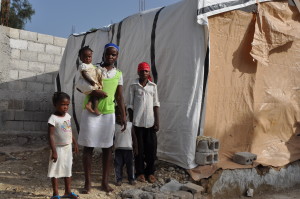 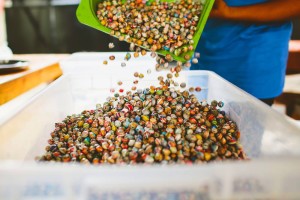 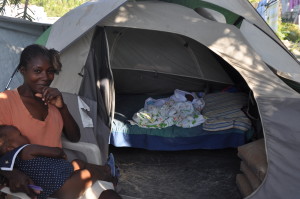