Shortly before I moved from Canada to Haiti to pursue adopting a child who had a mother (tongue in cheek),  I learned about a small stain on Canadian history known as the “residential schools”.

Not that all on wiki is true but – You can read about it here:  { https://en.wikipedia.org/wiki/Canadian_Indian_residential_school_system }

The gist of what happened was that well meaning Christian Europeans wanted to assimilate native American children in Canada into a more Christian and “civilized” culture and so they forcibly removed some 150,000 children from their homes and placed them in boarding schools where they would become more like the dominant culture of the day. The results and practices were pretty atrocious and I can’t help but wonder if well meaning Christian men and women of the day were ok with this because of the perceived end result of “salvation” for these children. (Another blog topic all together). The native population of Canada is still suffering consequences of these injustices. Many of the children faced starvation, death, abuse, rape, attachment issues as well as serious addiction and psychological problems.

Much like the United States scrambles to undo the embarrassment of slavery and it’s treatment of Native peoples, and Germany pays it’s penance for the Holocaust, so Canada also has it’s own amends to make with indigenious peoples and the wrongs done to them. I pray that we are not merely repeating our mistakes again in another “holy” arena: Orphan care.

Fast forward to modern day. Fast forward to last night when I read a blog about a mother who was wildly thankful that the biological mother of a three year old had finally caved and given up her rights to her son. Fast forward to my own adoption story which came from the fact that poor people don’t have a fighting chance but to abandon their children or die themselves because the systems are so unjust and lopsided that if we don’t step back to look at it from a distance, we too feel that the most loving thing to do is to play right into the soiled system that strips adult poor of all rights- including their own dignity and the joy of being parents.

We say, “This child will be better off with us.” We say, “They will have opportunity”.  We say, “We will raise them to love the Lord.” Forgetting that the very same Lord was the one who decided to give that very poor mother her precious child. We take a child out of the context of the family and we focus only on him or her and we forget that there really are no poor children in the world ( as if they were supposed to be the ones who add wealth to the family) but rather there are only poor adults who are in desperate need to be able to take care of their children. And unlike Solomon who had the wisdom to figure out what was best for the child, we cut the poor families in half and only offer to help one dismembered part of the unit the help they need and act as if we have done the Lord’s work. We sever poor families and we call ourselves “defenders of orphans” and we send money to do it and we pray for birth mothers to just sign the papers and be done with it, and we feel proud that we can raise our new children the “right way and with opportunity”.

And I am just as much baffled as anyone else as how to do this well because when I see a poor hungry baby and mother who doesn’t have a clue how to take care of it properly, I find myself thinking how much easier it would be to take the baby and be done with it than to invest in this woman who isn’t half as cute or nice as the baby after a life of malnutrition and abuse. It is so much easier to start and orphanage people. You just need money.

The poor are not angels. They are hard to empower. They have been taught over a lifetime that justice is not with them, that power will be stripped from them and they are now so comfortable with this that they will give it away freely. My life has forever been changed when I realized that my responsibility was not to help poor people, but rather to give them back their power by stopping to usurp the things that God gave them and to stand as defenders of those rights that belong to them even when they don’t know that they should stand up for themselves anymore.

My hope and my heart is not to judge adoptive parents or churches who have a budget set aside for orphan care, but to beg those of faith to look at the bigger picture. Let’s be a part of the WHOLENESS of people and people groups. Let’s bring justice back. Let’s do for them what we would want someone to do for us if we were as helpless as they are. I am pretty sure they would be very blessed to know that we would cheer them on to be able to raise their own children- with dignity. 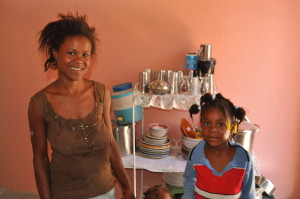