I feel like I have told the story so many times. The day that started like any other day. How we went to the store and bought flour and bananas and spent the day making tortillas. How later that afternoon, the very same grocery store that I bought the flour in came down in a crash that shook the island and killed so many people, some that I knew by name.

I remember the helicopters, the airplanes that were landing every few minutes for days, the masks that we wore when they said they were going to spray the city with disinfectant because of all of the dead bodies. Half of what we knew at the time may or may not have been true as we had no real access to good information for several days. We just knew that it was massive. The destruction and casualties were massive.

A few days into it, the trucks started coming with loads of bodies to the cemetery at the end of the block. Those images were etched in my mind so clearly- especially the bodies of the children. It took years for me to imagine that God could still be good after that.

A few more days and the relief workers began to flood in. First the doctors to treat the people who had lost limbs and broken bones, then the food and water people, then the tent trucks which led to the placement of the iconic massive tent cities that many children spent half their childhoods in. Although much was done in the last 7 years, Haiti still seems pretty much the same as before. Before it all happened. Broken walls, orphanages, poverty, hunger.

A common question I get asked is just that: “How are those people doing after all that aid money came. Where did the money go. Is it any better now?”

I don’t even know how to answer that question.

Aid wasn’t meant to fix Haiti. It’s not how countries get fixed.

You see the problem lies in the fact that short term aid can’t really turn a county around. It can heal a broken bone, feed a meal, build a building. But it can’t change a country that is in poverty into one that is prosperous. Short term aid workers are a lifeline in an event like the earthquake was. They saved thousands and thousands of lives. And for that I am so thankful.

But Haiti today is pretty much the same.

Because there are no jobs.

How can a country advance and get better when the very system they live in is broken?

So, I answer the question that people ask me every time I talk about Haiti like this:

Haiti is still struggling. It was struggling in a fierce way before the earthquake and it is struggling still. Many things make up the web of dysfunction that is happening as to why so many people can’t  provide even the basic needs for their family, but the one thing that I know that I can do today to make it better for those within my reach is to continue to teach job skills, provide means for training and advancement, and to create jobs. This is why I do what I do. So that Makilene, Rose, Junior, Adrien, Lucify, Joseline, Josephine, Kettly, Lovana, Mdm Bessa, Jimmy and on an on can feed their children today. That is the hope I have for Haiti. That someday we will invest as much into development and empowerment as we do aid when tragedy strikes. It is my hope that by buying a coffee mug or a t-shirt or a necklace that we will realize that we are doing as much or more to help someone in need as if we had given our spare change or gotten a tax write off.

Seven years later and Haiti is still struggling. I have hope that when my Haitian kids are grown that they will be able to go back to a country full of rich and vibrant prosperity birthed out of the awareness that trade and jobs will be the only thing that turns things around. Perhaps the Biblical mandate to take care of the poor is deeper than giving a handout. For me and for the sake of my children’s country, it certainly is. 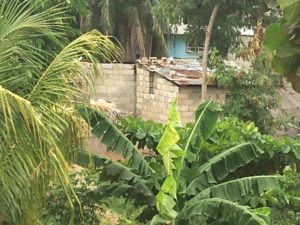 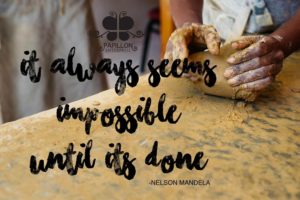