It is the rainy season in Haiti. It rains like clockwork this time of the year. Each night at about 6pm, just as dusk is approaching the big rain splats start to come down. In the spring it starts around dinner time, allowing my kids to use the balcony as a slip-n-slide as the rainwater cascades onto the tiled flooring outside. In the fall, it begins around 8pm, just as I am putting my precious four children down to sleep. The weather in this tropical context seems to have a timer set.

The spring rains come down a bit harder than the misty fall rains. The flash floods are filling homes, ravines. and the low lying beach slums with water and catastrophe. Everyday someone dies. Poor drainage in the slum areas and lack of stable housing structures make the much needed rains come with bitter pain. Coupled with the political instability on top of the usual unemployment, abject poverty, starvation, and ongoing sicknesses such as Zika, Cholera, Malaria, and Dengue, it can drive a person to sheer hopelessness. Two nights ago it drove a woman in labor over the edge.

I heard a bunch of noise outside. Lots of yelling. Lots of discussion. Being a bit paranoid because of my recent mugging, my friend who experienced a home invasion, and Mario being shot, I checked in with my security guards outside who standby around the clock for my protection. The static of my radio transmission sounded as I asked them what was going on outside. My evening guard, a tall thin new father named Roy, walkie talkied back to me.

“They found a baby in the ravine.”

When the rains come at 6 o’clock, the ravines immediately flood with water and create a small fast flowing river of rapids that take almost anything in the path downstream with them in a violent rush towards the ocean. A mother had been in labor. A mother had been distressed. Perhaps overwhelmed by the fact that she was possibly raped, that the father had left, that she couldn’t feed this child, that she had nowhere to live, that she had no job, that she hadn’t eaten herself in days, that she had been shunned by her family for being pregnant, -anyone of these things could have been too much for her. These are the situation so many of our artisans come out of when we find them, often roaming the streets looking for an orphanage. This one wasn’t looking for an orphanage. Maybe the tightened laws and pressure from Unicef because of horrible abuses by these institutions have made them suspect and underfunded and unable to take more children in. Perhaps because she was just young and scared. For whatever reason and whatever circumstances, she did the unthinkable. She took her brand new baby, blood stained and with the umbilical cord still wrapped around him, and she put him in a flattened cardboard box at the bottom of the ravine, right before six o’clock. She knew that when the rains started, that her burden would be washed away. That her tiny son would be lost. And for whatever reason, that thought was more tolerable to her than the circumstances she was facing.

A person in the neighborhood, right outside my house, was passing by. He heard a cry. A tiny cry. He stopped for a second and almost paid no attention. Goats, he thought. Goats do sound remarkably like human babies. But this one was too faint, too weak of a cry to be a goat. He walked carefully towards the noise. The darkness was setting in and he poked around, looking down into the ravine. A raindrop fell. Another cry. A small movement. A box. A baby. Thank God he came when he did. Within 20 minutes the rains would have taken this precious life away. He called his friends over. More friends came. As it happens in this culture, anything out of the ordinary- good, bad, tragic, or unusual becomes a spectator sport. A crowd formed as he pulled the baby, bloody and naked out of the ravine. Discussion started. Who was the mother, what should they do, who is responsible? Someone in the crowd with good sense decided to take the baby to the hospital. Hospitals here always have babies lying alone and abandoned by mothers who can’t or won’t take care of them. These babies lay around in solitary confinement and unheld until they are finally assigned to an orphanage where they will most likely spend the rest of their lives. Very few kids actually get adopted. Even those who do, will go through a lengthy process that will take them well into their toddler and preschool years.

We sigh, we scream, we cry, we don’t understand. We have so many women and men in the United States who would give anything to mother or father one of these children. We can’t understand why it is so hard to connect these discarded children with eager and loving parents.

In short, the reason is corruption.

Bad orphanages, self-serving orphanage directors, parents wanting to take short cuts and not respect the laws, a culture that is so dysfunctional that it is easier for a parent to give up a baby than get a job, all lead to lengthy and impossible adoption processes. It has gotten so bad that I would personally not recommend to anyone to adopt from Haiti. It is simply too hard of a process. Add to that the fact that orphanages are seriously under-supervised by authorities and underfunded, and you will find a systemic problem of vulnerable children being used as money makers, being under-cared for, under-nourished, and psychologically scarred for life by the time a parent finally gets a beloved child home. These parents quite often find that they are dealing with wounds that they have no idea how to handle. Failed adoption, readoption, rehoming, and straight up child trafficking often become the second stage of tragedy for these already wounded children.

I personally have a problem with most orphanage situations. I feel like people come in like the Pied Piper and woo poor mothers into giving up their children with promises of education, adoptions, and a dream life for their children. This sadly is almost never the case or the outcome for children who are raised in orphanages. But before I make any blanket judgements about the right way to do things, I have to stop and think to myself that it would have been much better for a mother like this to have had an orphanage that would take her baby instead of having to throw her child away like she did.

There is no black and white in broken situations like this. There are only lesser evils and shades of grey. This mother should have had a chance at a job. That would have been ideal. But there were none. So perhaps she should have been able to find a safe place to leave her baby, maybe with a friend or a relative. If none of these options had been available to her, then there should have been an orphanage that could intercept this child before the unthinkable moment came about.

If there had been an ideal orphanage available to her, this is what it would have looked like:

The orphanage would have had no more than 20-30 children.

Ongoing training of the nannies on psychological and emotional care of the kids would be given priority.

Orphanage directors would be screened and have qualifications to care for children.

The children would be given a balanced diet including vegetables and fruit.

The children would be taught to play with toys.

The children would be grouped in family groups with on nanny assigned as their primary caregiver.

The children would be educated at the same level as is standard in the developed world.

The children would be given responsibilities and chores and would be set up for success as they grow.

The orphanage would be clean, insect and rodent free, and a healthy place to grow up.

Every effort should be made to place the kids in a family situation as soon as possible.

These are the kind of things that should be a must before we begin to invest in the care for children in orphanages. If we do fund orphanages that do not meet these minimum standards for children, than we are simply participants in the abandonment and abuse of children. We must also hold ourselves accountable to realize that if we can’t adequately care for children through the orphanages we support, then we are not equipped to continue running an orphanage and we have to find alternate solutions for the children who reside there. If we decide to fund institutions that are subpar for children, we are only players in the field of gross injustice and are actively making the situation for these children exponentially worse.

My time in Haiti has made me very critical of orphanages. I have seen some awful things. BUT I can’t be black and white about these institutions. Sometimes it is necessary to have a safe house, a rescue center for desperate situations. I, personally, fight to keep moms and babies together. It is where I have found my calling. And I believe with all of my heart that it is the most just thing to do for a mother and her child. But there are always exceptions.

Even with these exceptions, we are still mandated to be sure that what we give is contributing to the betterment of the situation for orphans and not financing the abuse of those that we are trying to save. It is a heavy responsibility.

If you choose to give to an orphanage, do the research and then GIVE WELL. Don’t be stingy with these children. They have already been through enough. But hold the orphanage accountable to the same standards you would want for your children through the generous funding you provide. Make sure that there is transparency. Be mindful of the children’s emotional health. Investigate and follow up on abuse. Pay the nannies well. Take care of your orphanage directors well.

And while you are doing this, look for ways to prevent child abandonment and tragedies such as I witnessed this week. Orphan prevention should always be the first step towards orphan care. Pictured below is Joanne. In January, she was a desparate and homeless mother who was wandering the streets outside of our artisan house begging for help. She has been working now for four months and is one of our top ranked employees. There is hope. She is proof. Pray for that baby boy tonight that he would find a family worthy of him, worthy of a  little prince. 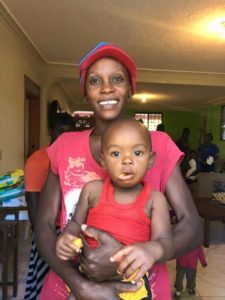