Up out of the Ravine and into Loving Arms

On my fridge I have a magnet that says,

“Just when the caterpillar, thought the world was over, it became a butterfly.”

And so perhaps it was for this small child that endured the pains of childbirth only to be dumped in this ravine to die. 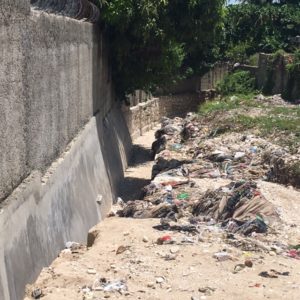 So many people responded to the story I posted this past week about this little baby. So many wanted to hear if this baby was ok, if it had been rescued, if it was alone, if it was cared for and how could they help. I am not calloused to these situations but my eight years in Haiti have made me realize that I can’t follow up on every tragedy I encounter. There are just not enough hours in the day and my life would spiral out of control in a matter of weeks chasing tragedy after tragedy. Learning to let things go, in spite of heartache, has become a way of life.

But you wouldn’t let me.

And I am so glad you didn’t.

Because of YOUR overwhelming care and concern, I knew I needed to follow up. I had to know the end of this story. For myself, but mostly for you. And you gave me one of the most beautiful moments because of it.

Haiti is small and it is fairly easy to find people and follow up with situations. I asked around at work, and one of my artisans who had been there when the baby was found told me he knew where the baby was. He told me that the baby was at a house just around the corner. I was surprised to find out that it wasn’t still in the hospital or placed in an orphanage. Just like you, my mind immediately was filled with questions.

He walked me down about five minutes from the artisan house to a new little brick house that was built just last year. 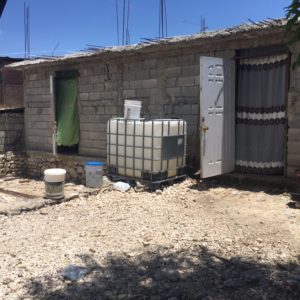 We knocked on the gate and a female voice inside called for us to come in. We entered through the steel door and through the lacey white curtains that were blowing in the breeze. The first room had a dining room set and a hutch as most Haitian homes do. In spite of the poverty, the baroque French influence can be found all the way down to the poorest of homes. The back room had a bedroom with a double bed. The bed had a crisp white sheet that was tightly tucked in for a nice fit. In the center of that bed, lay a baby with a sweet pink hat and little yellow booties, being doted on by her new adoptive mother. 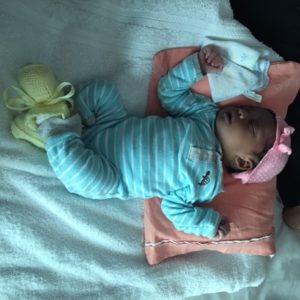 The Haitian woman, Chantal Joseph is married and like me, just turned 40 this year. She had been in the crowd that had found the baby and fell in love. This baby, who I had initially been told was a boy, actually (SURPRISE) is a baby girl. Chantal has only ever had one child- a son, and had always wanted a girl. She had been the one to take the baby to the hospital, she had bought all the necessary antibiotics and the formula and had filed a police report of abandonment so that she could legally keep her. She was so proud and happy to be the new mother to this sweet little thing. A gift. The Lord had given her a gift. I told her so. She agreed beaming.

I have honestly never seen something so beautiful in my life in Haiti. A perfect end to such a tragic situation. A strong, yet poor Haitian woman stepping up to take care of an abandoned baby. No foreigners involved, no orphanages. Just a giddy and happy new adoptive mom.

I had found some baby clothes at my house (the ones I had collected for the baby I thought I was going to get earlier this year) and some diapers and formula to give her for the impromptu baby shower I walked down with. I took a few pictures and I congratulated her for her new daughter. She was so happy. I am so blessed. This little girl lives right around the corner for me. I am so glad I will get to see her grow up.

Happy Birthday Nerline. Great things are in store for you! We are so happy you are here!