What happened to all the money? (The story of aid money in Haiti) 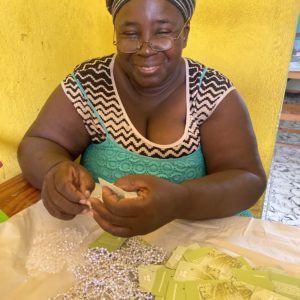 Millions of dollars were donated in the months following the earthquake and since in Haiti. People were eager to help and hopeful that this boost and influx of charity would perhaps be the answer that Haiti has needed for so long. Things appeared to be getting better for a few years and then rumors of corruption and confirmations that the money was gone began to surface. The big question was what had happened to all the money? The Red Cross was blamed. The Clinton Foundation (who incidentally helped Papillon a lot with sustainable resources) was blamed. The politicians were blamed. CEOs of non-profits were blamed. And I can’t honestly speak to each of these accusations.
No doubt there was corruption and misuse of funds somewhere with all the money that was given.
No doubt that some senators and politicians and NGOs made money off the tragedy.

But there is another part of the question that is an indicator of a hugely flawed perception about giving charity.

Let me give a quick and easy to understand analogy. My kids eat every day. They eat breakfast, lunch, dinner and snack all day. They need clothes. They need a toothbrush. They need shoes and jeans. People who don’t have kids might not realize how relentless the cost is, but it is insatiable. I’m sure you can see where I am going with this.
Someone could say, I just gave you $40 to feed your kids last week.. where did all the money go?

As if I had mismanaged my money.
No. The kids needed to eat.
And they need to eat again next week.
And it will be another $40 more, and another.. and another.
My kids are dependent. And the money evaporates when it comes to them.
Kids are supposed to be dependent and it is ok that they have those needs. At least for now.

This is how charity and aid also work by nature. People are dependent for a time and the resources get used up quickly and are needed again and again. Unless something changes to make them independent.

When a person gives $100 to help someone in need and say in a week.. where did all the money go?
It doesn’t really make sense.
What would you do if you had $100 per week only. You would spend it on food and necessary purchases and you would be left in the same spot again- looking for the next $100.

The difference is that you and I, most of us reading this, have jobs- which is our source of stability. That is where we get the income to meet the ongoing needs of our families. We are not dependent on other people’s charity for those needs to be met.

For a country like Haiti, and those of us wanting to help, unless we turn the corner from aid to development, from charity to empowerment, form orphanages to jobs, from hand-outs to education, we will never see the end of the bottomless pit of dependence and need for charity that continues to pour into the country only to leave the rest of the world wondering….Where did all the money go?

They were hungry. That’s where the money went. They needed to send their kids to school. The teachers needed to be paid. They needed to go to the doctor. Their child needed shoes.
They weren’t using drugs
They weren’t spending their money on partying.
They weren’t binge shopping at the mall that doesn’t exist in Haiti.
They were simply trying to live.
And that is where the money went. Port Au Prince is a city of over a million people with over 2.5 million in the greater area. Imagine the dollar amount it requires to keep just that many people’s basic needs met. Sure, much of it was probably squandered and misused, but the money that went into the hands of Haitian families was used up. And they are still in need. Until they become independent.

So, how to stop the cycle? How do we become a part of the lasting solution in places like Haiti and others in extreme poverty? How do we truly help?
When you give be sure that the organizations managing your money have sustainable development and education as part of their mission.
Invest your donation into jobs, training, awareness and empowerment.
And of course, buy things made in Haiti and other struggling countries of the world.
And after that pray for Haiti and for justice for the poor.