How we pay our artisans. Bean Trade.

Reposting this from a blog I originally posted in 2013 on the Apparent Project Blog.

Let me first start by saying that life in Haiti (or should I say life in general) has left me disillusioned with a lot the past few years. My first experiences with orphanages and the quantity of kids in them with parents who love them led me to start the Apparent Project-an artisan initiative to keep families together and help end -to the capacity that we could- child relinquishment with poverty as the determining cause. My disillusionment in Haiti has only continued by the way that I have witnessed food aid kill the farming industry, clothing handouts kill more industry, medical aid shut down hospitals, religion linked with handouts kill the core values of those religions, school sponsorships breed a large quantity of bad schools in order to receive that sponsored aid. etc.. etc.. (and my heart desperately wants to see the good in all of this).

The disillusionment only continued as I began our artisan program and started to work with and get exposed to various “fair trade” organizations that approached us to carry our artisans’ work.

Some of my first set of shocks came from some of the most notable fair trade companies explaining that they could get necklaces similar to what we were making in Africa for as little as 50 cents per necklace. My head went into a dizzy spin the first time I heard this. Are they trying to low ball Haitian workers by bragging about how they are successfully low balling poor Africans in order to get us to lower our prices? What in the world? Fair Trade? A quick look at some of the price points on these “Fair Trade” websites show a mark-up of 10-30 times what they paid for the item. Wow.. quite the impressive sales gimmick isn’t it?

Now don’t get me wrong, but the time an item for sale is made, marketed, transported, re-marketed, had signs put on it, been placed in a well lighted air-conditioned store, paid the driver and the salesperson- a lot of people have to be paid along the way. There is no getting around that. What I don’t like is when companies who consider themselves “fair trade” seek to remain competitive by pushing the price point down at the most critical link in the chain- with the poor artisan who made the darn thing.

Let me spell it out for you. If an item was going to be listed in the store as fair trade and the wholeseller could get away with paying 50 cents for the item to the laborer who made it, but was selling it to the retailer for $12 (and then the retailer was marking it up to $36 for the consumer)- what if instead of trying to negotiate 50 cents for the piece, they instead paid $1.50 for the piece at the beginning and absorbed that cost at the end selling it for $13.50 wholesale and then $37.50 retail? Are you following that. The consumer pays a mere $1.50 more at the end and the poor person who made it has now tripled their salary.

Would you buy a piece of fair trade household good item or accessory that you knew the artisan who made it was actually getting triple what could have been paid but only costs a fraction of the cost more for you? Of course you would.. that’s what “fair trade” is all about. It’s about letting people be able to rise above the poverty line and not exploiting them for our own luxurious spending. My linguistics professor in college had a phrase that stuck with me for life, “The word is not the thing.”. I do not think Fair Trade is what most of us think it is. I wish, with everything in me, for the idea of what it conjures up to the consumer to become the reality. But for now, it simply is not.

Now economists (and factory owners) who are a lot smarter than I am will tell me why the world will come crashing down with the reckless rising of prices to a reasonable wage for the poor, but i can’t say that I’m buying it from where I’m sitting. There is room for justice.

Here’s what I am thinking. Forget about Un-Fair Trade. I have come up with my own standard of paying something that is competitive, marketable and doable. 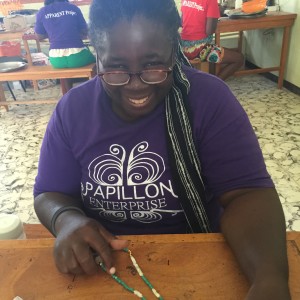 BASIC EVERYDAY AVERAGE NEEDS- trade. (and isn’t it embarrassing that we have to stoop even that low?)

I’m talking about what it takes to meet your basic needs as a family.. to put the “beans” on the table everday. In Haiti, at least in Port Au Prince, for my artisans, this works out to be about $215 per month- or $11 per work day. This is an extravagant TRIPLE the minimum wage in Haiti -just to be able to feed your family appropriately, pay rent on a one room shack with a tin roof, and send 2-3 kids to a semi-literate school. (We’re not even touching emergency medical needs, transportation, church clothes or any of those things…)

My experience as we were striving to employ people is that EVEN THOSE WITH JOBS were looking for orphanages to give their children to because they couldn’t take care of them. A worker in one of the local orphanages is getting paid $60 per month because her meals are also included in the salary. Her FIVE children are at home starving. What is she supposed to do when she sees the kids in the orphanage getting three meals per day? This is a no-brainer for a loving mom.

BEAN Trade works like this. For our artisans, we take a piece of jewelry, a basket, a metal work piece, or a purse and we observe our artisans at work. We find out the average production total per day of each individual item, divide that by $11 per day and BAM.. we have BEAN trade… families who can pay for their lunch AND their kids to go to school.

Let me break this down a little further. If an artisan can make 22 pairs of earrings in one day comfortably, we pay them 50 cents per earring. If we were simply “fair trade” we could pay them less per pair and no one would be the wiser. The difference is pennies per earring. When we go to sell this pair of earrings to a retail store, we figure out our costs for materials and overhead costs and sell this pair of earrings for about $2 per earring to the retailer instead of the 1.67  or so that we could get away with at a “fair trade” price. The retailer doesn’t balk too much about the difference and happily marks up that earring to between 5-10 bucks, where you, the consumer, are happily wearing a piece of jewelry for the same price you just spent on your mocha frappuccino and you don’t even know that you are enabling a family to be able to shelter themselves, feed their kids, and send them to school because of the 34 cents plus or minus  that got added in at the very  bottom of that price structure.

That is what we do with our piecework at Papillon Enterprise. We make sure that everyone has the ability to work in order to pay for their basic everyday average needs in Haiti. BEAN TRADE.

PS: My nickname growing up was Bean… Shelley Jean, Jelly Bean.. get it?